There’s no denying that the culture of clothes was an important talking point this year. From athletique chic hitting the runways, to social media declarations, 2015 was unlike any other. Below, we’ve collected some of the hottest trends, celeb style, and red carpet 2015 fashion moments. 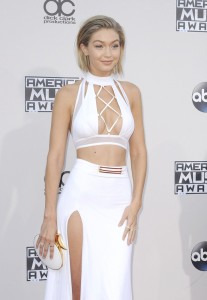 20 year old model, Gigi Hadid took to her Instagram to defend her killer curves. The ‘it’ girl was spotted on numerous red carpets, editorials, and of course the runway. Although designers loved her, Internet bullies only wanted to remark on her body type (even though she still fits sample sizes). She stated, “No, I don’t have the same body type as the other models in the shows…No, I’m not the first or the last model of my type in this industry. If I didn’t have the body I do, I wouldn’t have the career I do. I love that I can be sexy. I’m proud of it.” Way to go Gigi! We at therunway+ agree, sexy can come at ANY size!

Balenciaga, Chanel, and even Kanye West got involved in the athletique chic trend for fashion 2015. It was the year of comfy couture. Traditional fashion followers never expected designer sneakers to sell out online and on shelves. Thank celebrity collaborations and social media strategy for making us all want a shoe with performance and a fancy name. 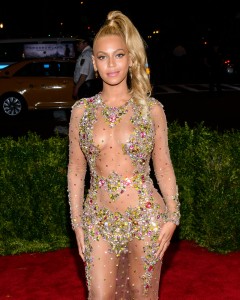 Beyonce at the MET Gala

Speaking of celebrity collaborations, fast fashion retailer, H&M, scored another hit when the company presented their latest designer collaboration with Balmain. Before the line was available, the hype was heard all over the world. On the day of the launch, lines were wrapped around the block and online shoppers had their finger locked ready to purchase. The line sold out in less than an hour with eBay scalpers marking up pieces by 500%.

The naked dress was a big hit on red carpets causing online chatter to be at an all time high. The pinnacle of the ‘naked dress’ trend came when singer, Beyonce, wore a bejeweled Givency creation to the MET gala. Previously J.LO, Ciara, and Kim Kardashian wore versions of dress, but it was Beyonce who shut down the show. 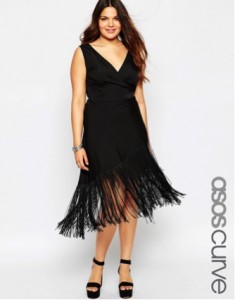 2015 fashion took a step back to the ’70s with wide leg jeans, fashionable fringe, and Birkenstock brand shoes. Of course, these trends were re-worked with updated appeal: better denim, vegan approved fabrics, and plus-size appeal. retro style was a big hit for fashion in 2015.

What were some of your favorite 2015 fashion moments? Let us know on Twitter @therunwayplus.